Public orchards have a long history in Seattle. In the 1890s to support his family bakery, A.W. Piper planted apple, cherry, and pear trees in the current-day neighborhood of Broadview. These trees later became recognized as Piper’s Orchard in Carkeek Park. Other orchards, like Amy Yee in Mount Baker, originated in the 1940s as trees individually grown and maintained before becoming collectively recognized as a public orchard.

More recent public orchards, such as Picardo in Ravenna, began after 1973, when P-Patch public gardens and orchards began taking shape. Since then, other public orchards have been intentionally created, including Linden Park Orchard in Phinney Ridge and Angel Morgan in Brighton.

High Point Orchard celebrates Seattle’s growth and reminds us of our connections to land, food, and community. By planting this addition to our public orchards, we aim to have more trees in our community at large, while specifically serving the many residents who call the High Point neighborhood home.

Several fruit trees, including kiwi, fig, apple, cherry, persimmon, and pear, were gifted from Swansons Nursery and West Seattle Nursery and can be found at the High Point Commons P-Patch garden and apiary. City Fruit started an Indigenous practice of adding complementary plants around the bases of each fruit tree in tribute to the history of this land and to promote overall tree health and fruiting. This practice, often called permaculture, is successfully employed at another public orchard and garden, the Beacon Food Forest, and we believe it will also help mitigate the pests that have impacted the older orchards.

The four Belmont apple trees planted near the Neighborhood House Community Center –grafted out of rootstock that could be 130+ years old by the Friends of Piper’s Orchard–represent the four organizations that came together for this project and are committed to help steward this orchard in future years. Through these trees and our partnership, we continue the history of public orchards as a celebration of land, community, and the hope that these trees bear fruit for the next century of community members and residents to enjoy. 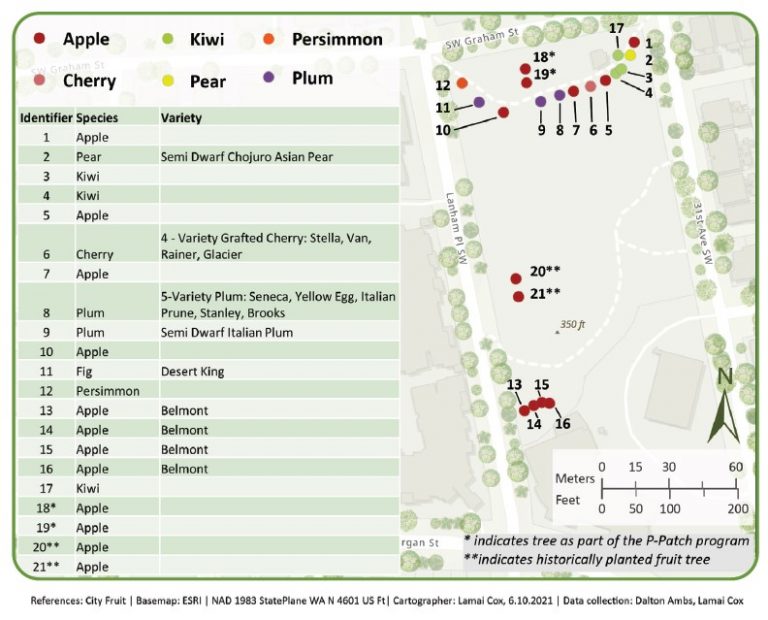 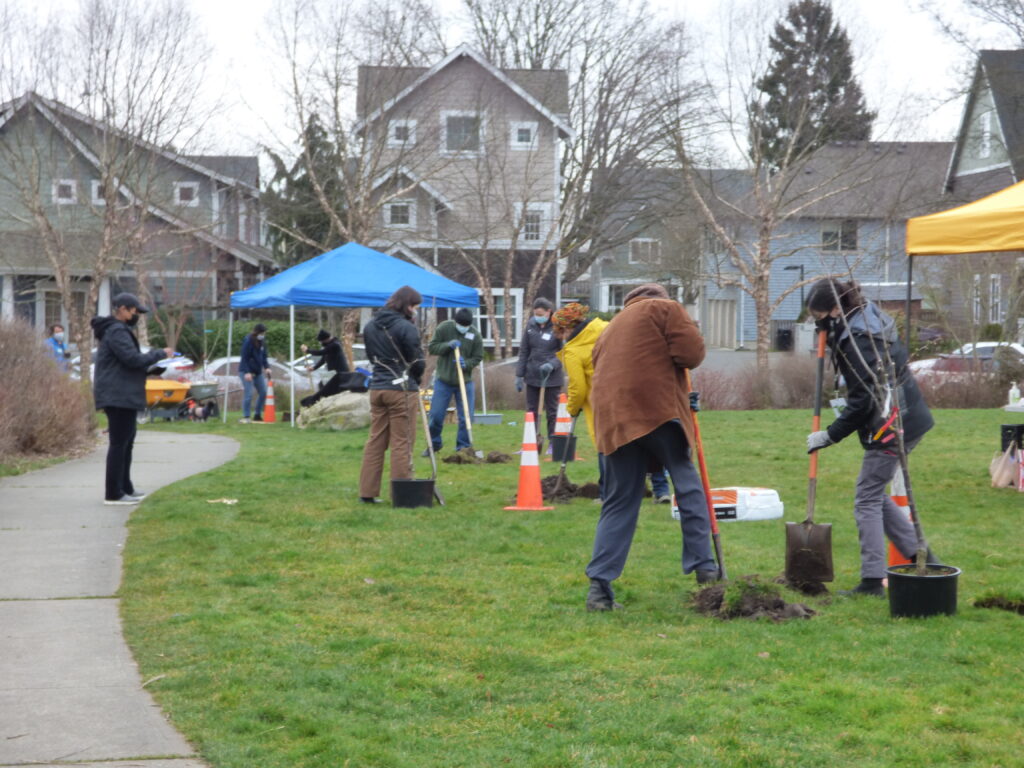 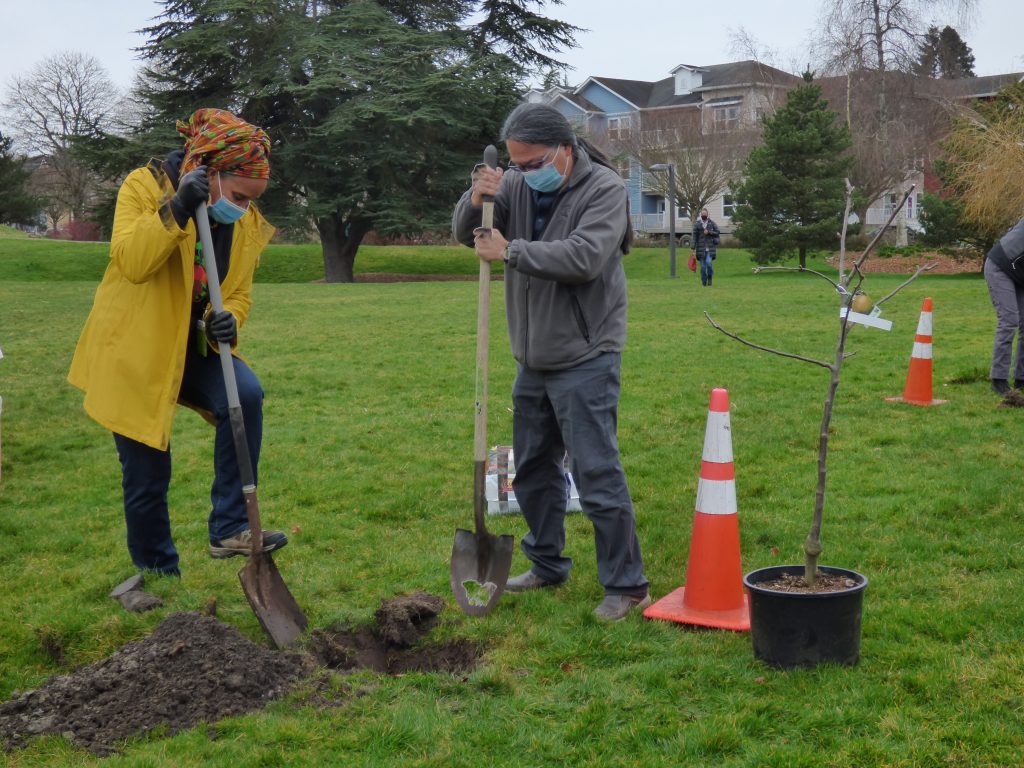 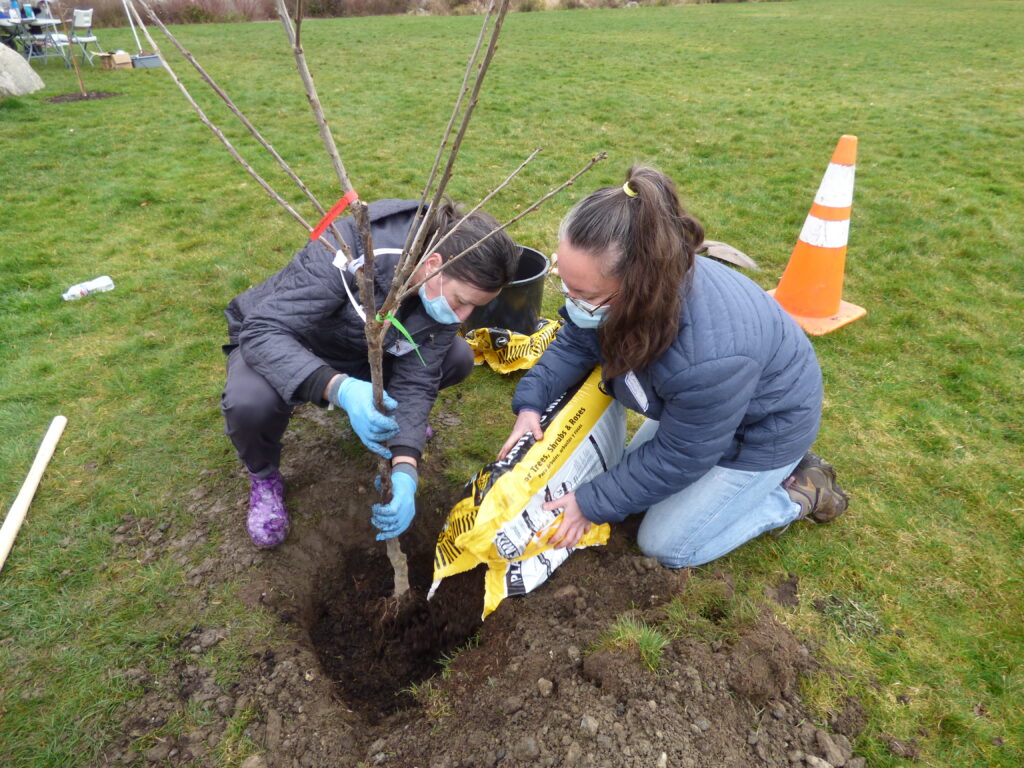 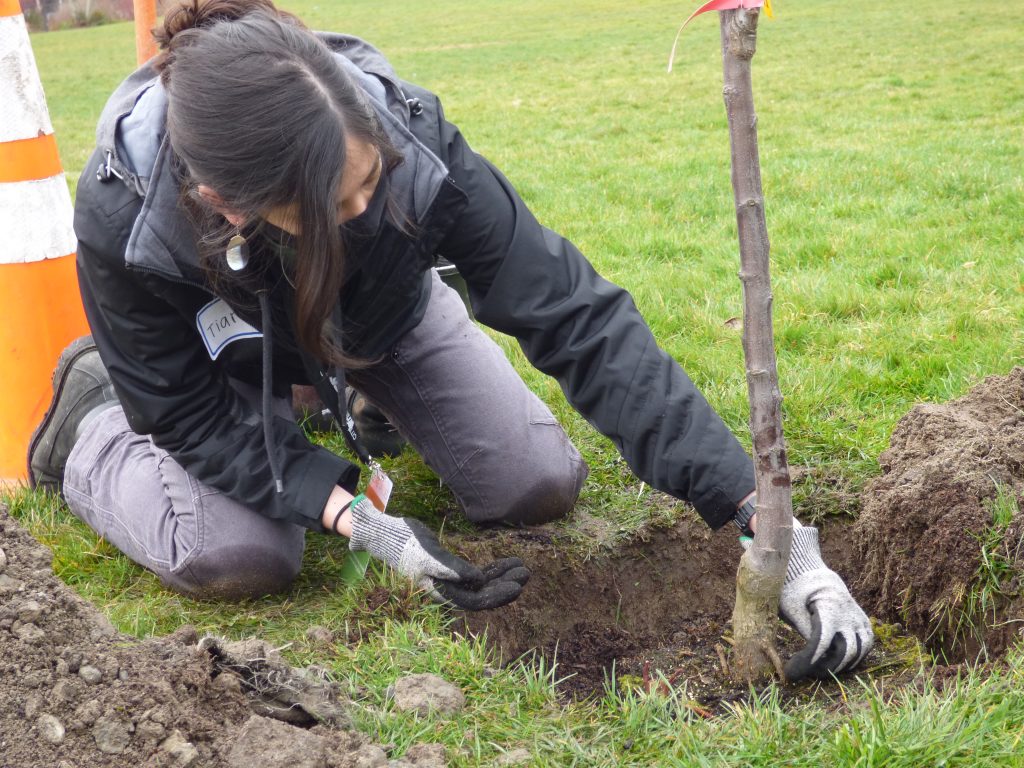 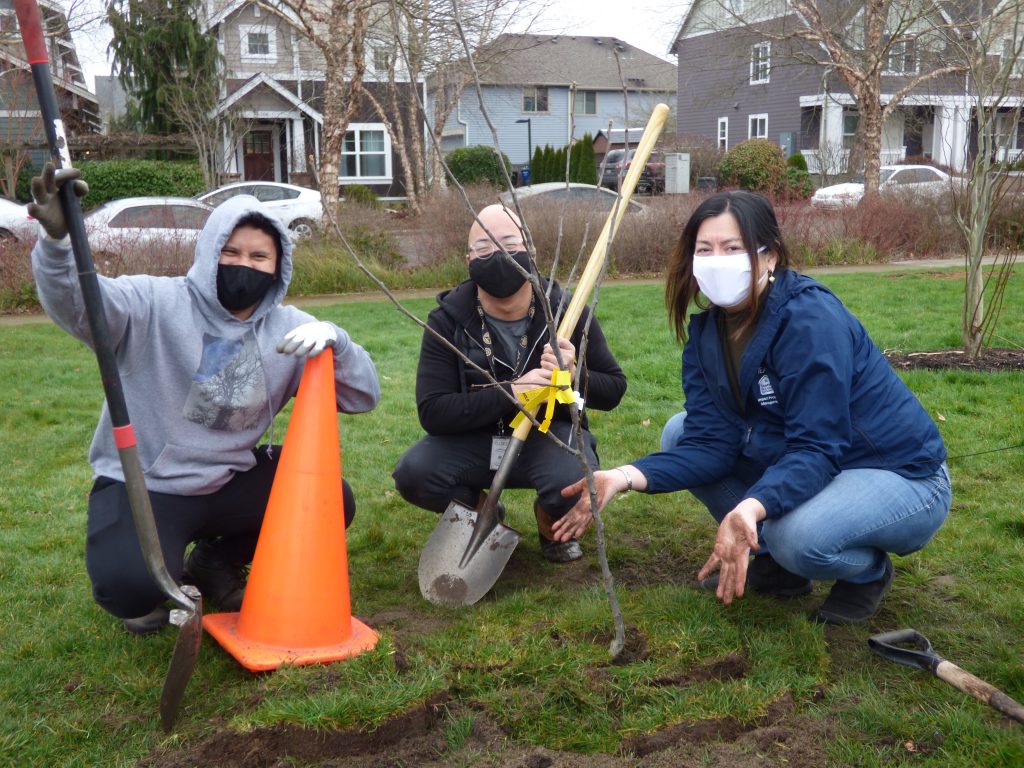 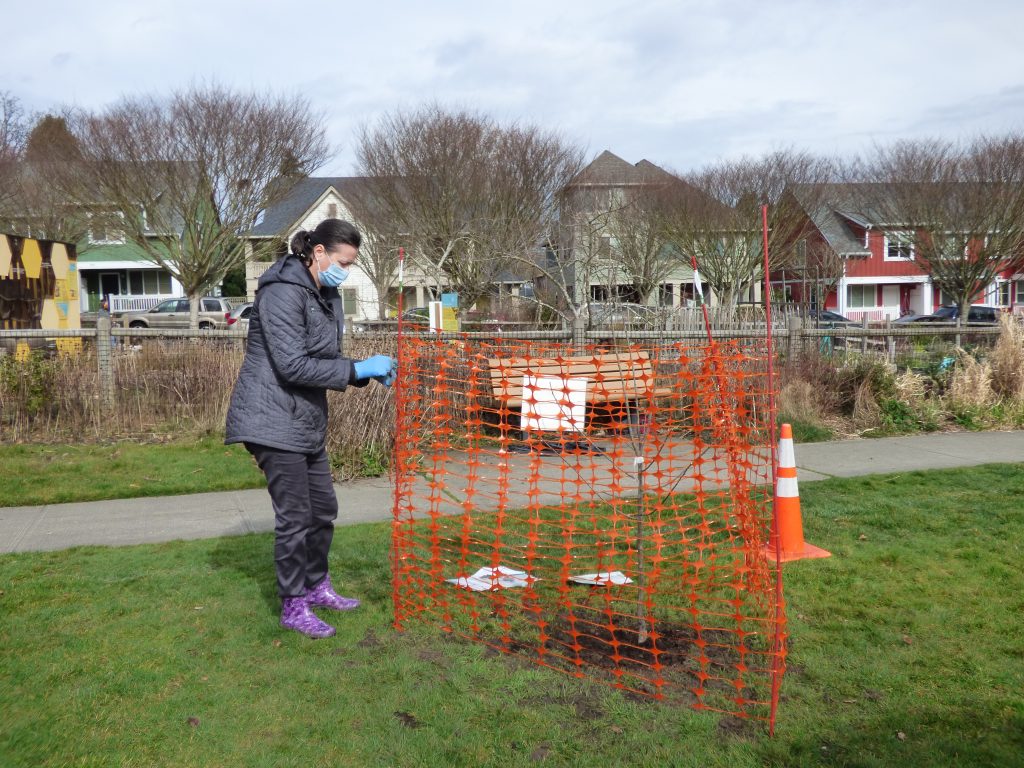 The High Point Orchard trees are in the bloom!  Having been in the ground for a little over a year, the fruit trees are established and growing.  It will be a few more years before they will be ready to bear fruit, but in the meantime, the saplings’ branches will be pruned and trained so that they are healthy and strong for when the time comes!  They also received a healthy layering of cardboard and mulch to help with nutrient cycling, water retention, and weed & turf control.  Lastly, the four Belmont apples at the top of the orchard were weeded and companion plants were planted to help foster a healthy soil ecosystem. 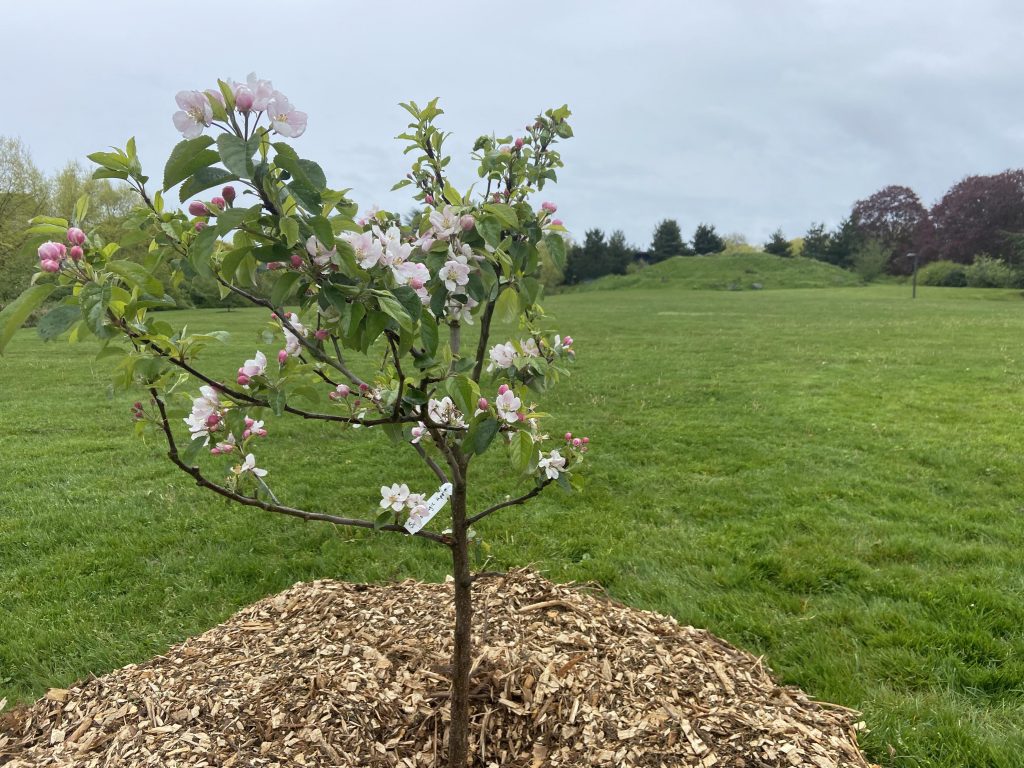 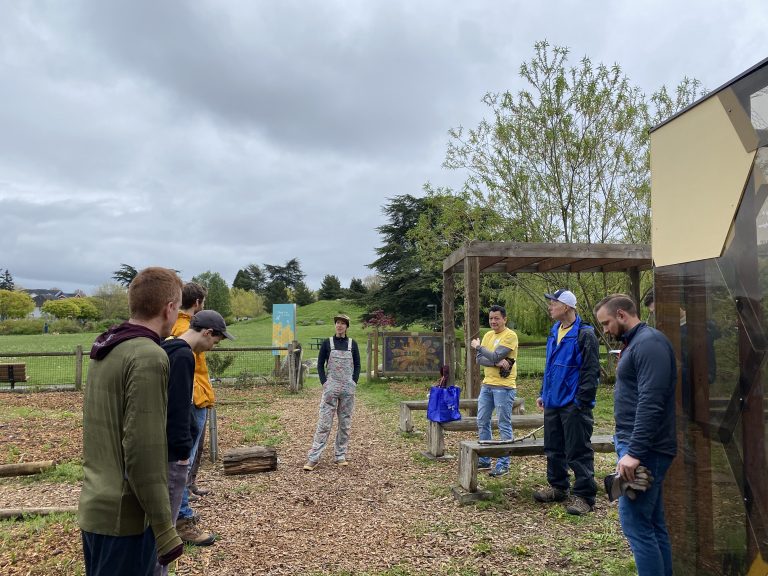