Bavarian-born Andrew W. Piper and his wife Wilhelmina (Minna Hausman) owned The Puget Sound Candy Factory, selling baked goods and candy from their konditorei, or confectioner’s shop, in downtown Seattle.  A “Jack of all trades,” Piper was also a political cartoonist, painter, City Council member, and candidate for mayor.  After Piper’s shop burned down in Seattle’s Great Fire of 1889, he opened a bakery in a tent in Nome, Alaska, then later returned to north Seattle as a farmer and orchardist at Piper’s Canyon, now Carkeek Park.

The family planted an orchard with heritage apple varieties and a large vegetable garden.  Minna and her son Paul took the fruits and vegetables into town to sell while Andrew Piper used the fruit to make pies for his shop.  Andrew died in 1904.

In 1929, the City of Seattle created Carkeek Park on the Piper’s Canyon property, naming it for a British stonemason and Seattle artisan who donated $25,000 towards creation of the park.  During the 1930s, Depression-era workers built trails and shelters in the park, and later it was used for a loop road, picnic area, and model airplane field.

On a run through Carkeek Park in 1981, Daphne Lewis noticed an apple tree in the underbrush.  After investigating the area, Lewis, a landscape architect, discovered a number of trees belonging to the historic Piper Orchard.  She went on to work with volunteers, including descendants of the original Piper family to reconstruct the old orchard, uncovering more than 30 surviving fruit varieties on the 1.5 cleared acres.  Lewis and others, known as the Friends of Piper’s Orchard, formed the Piper’s Orchard chapter of the Western Cascade Tree Fruit Association.  In addition to adopting and caring for the orchard, the Friends group planted more heritage apple varieties, including Wagener, Red Astrachan, King, and Wolf River.

Today, Piper’s Orchard is part of a 216-acre park in northwest Seattle that boasts breathtaking views of Puget Sound and hundreds of spawning salmon each fall.  It is one of Seattle’s greenest getaways, with six miles of walking trails, play and picnic areas, and a pedestrian bridge that leads over the BNSF Railway tracks to a sand beach on Puget Sound.

To find Piper’s Orchard, start from Carkeek Park’s lower meadow parking lot and walk up along Piper’s Creek.  The orchard is a 5-minute walk from the parking lot on an unpaved, slight upgrade.  A second, steeper trail to the orchard leads down from the park entrance near the Nancy Malmgren Environmental Learning Center.  An alternative way to reach the orchard is by following the ravine from the park’s small southerly McAbee entrance.  The McAbee parking lot and trailhead are behind a QFC grocery store on Holman Road, off of NW 100th Place at 6th Avenue N. 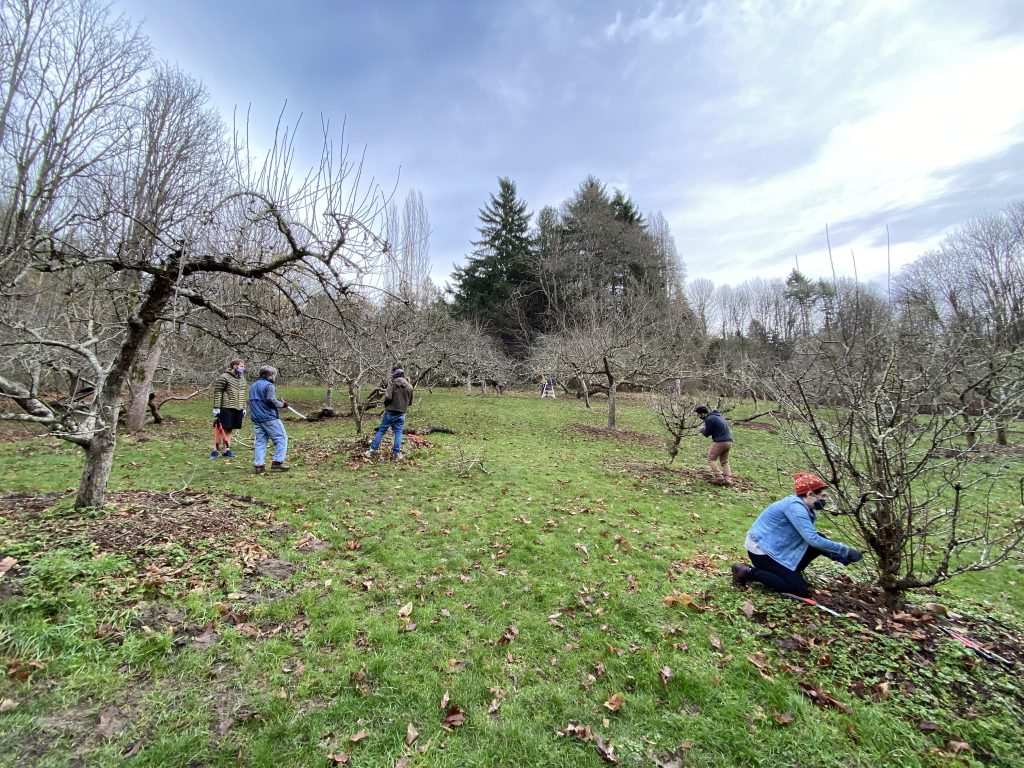 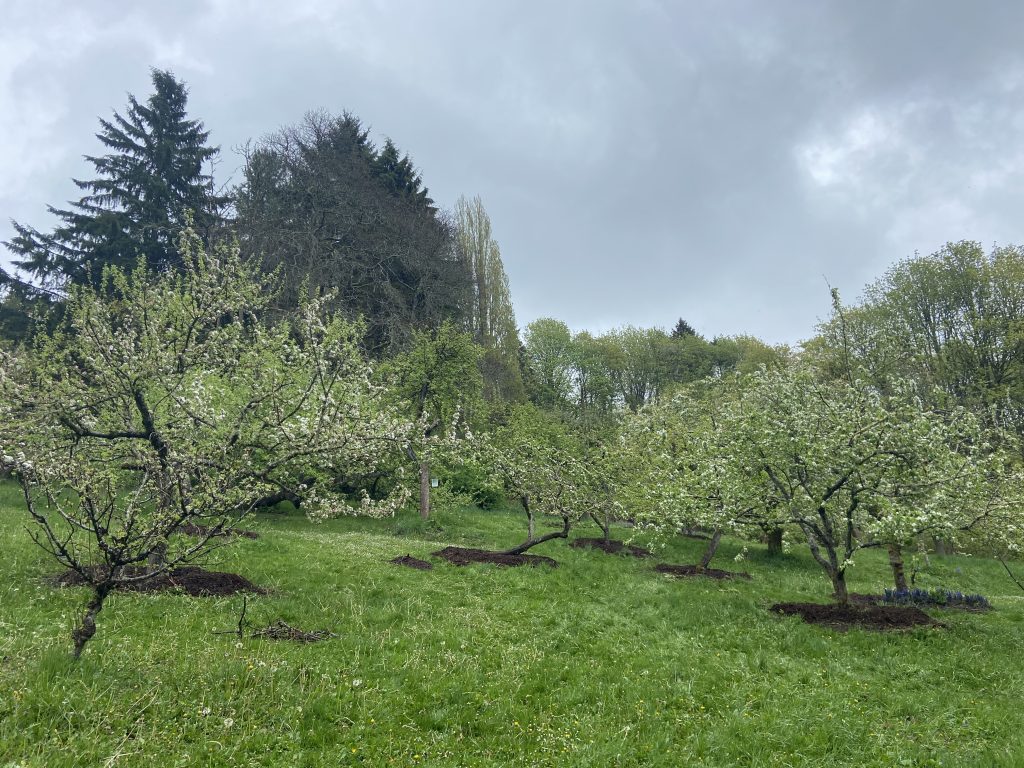 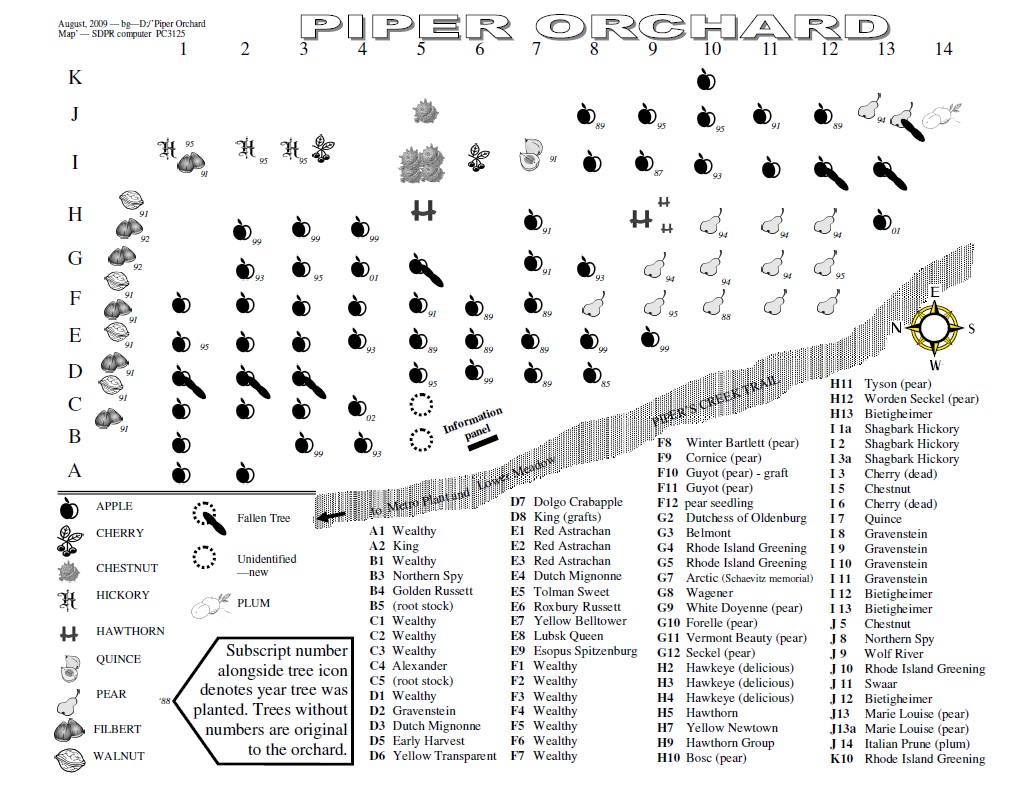